Why does software matter in eMobility?

As the post-conference feeling is still in the air after the International Electric Vehicle Symposium & Exhibition in Oslo, there are also many interesting observations and remarks.
The first that comes to mind is definitely how far has eMobility come in the last few years. And it’s been a long ride filled with innovation and groundbreaking changes implemented one by one. The progress in hardware is astounding to the point where some of the devices could merit a sci-fi label. From new-world chargers powering an electric truck at 1.5 MWh, to electric helicopters looking a bit like flying cars, it’s free to say that eMobility is here to stay and such events are the best proof.
What was also a bit surprising is that amongst hundreds of hardware and business exhibitors, there were very few representatives of the software side behind all of it. And yet, it plays a huge role in making it all possible.

Sure thing, possibly the most important aspect behind the mass EV adoption are the cars and the chargers. It’s what attracts the customer first and makes one join the green side of transportation. However, one must remember that it is the digital products that run the EV show in the background.
Charging networks, especially smart ones (aka the ones that bring the most opportunities to the field), can be deemed “smart” solely because of the backend platforms enabling the data exchange between a car, a charger and energy provider. Charge Point Operators run the entire charging station pools remotely, with the use of such programs in a way that ensures a seamless continuity of operation, even when there’s a high demand or minor issues.
Knowing that range anxiety is still one of the biggest eMobility obstacles, reassurance in a smooth charging networks operation is one of the crucial steps to take in order to dispel doubts about it.
Same goes with eMobility Service Providers - the figures that take care of the end-users, EV drivers. Most charging stations can be utilized from start to finish via the use of a dedicated app. Electric vehicle users now can not only start charging and get billed from the comfort of their phones, but also perform actions such as a charger reservation or price optimization depending on a tariff. It’s a facility necessary to promote EVs, giving their owners a peace of mind on longer routes as well as daily commute.
Software also runs the charging from a wider perspective. As there are numerous Charge Point Operators and eMobility Service Providers across the regions, a way has been found to unify their services so that they can serve as many EV drivers as possible. eRoaming comes into play allowing for multi-dimensional connection between operators and EV drivers.
In short, eRoaming can be established via the use of hubs and protocols. A hub here can be an open platform which, after subscribing, can be used by many operators, who operate on common terms. This all happens in such a way that a certain charging pool introduced to a common hub can then be easily used by clients (EV drivers) of different providers. Such a solution allows electric vehicle users to charge their car across cities/countries with limited hussle. The solution is entirely facilitated through a complex cloud-like backend system.
Software plays a big role also in keeping the energy distribution as sustainable as it gets. Through the backend smart charging facilities, charging stations can monitor and adjust electricity used so that the grid remains safe from overrunning its capacities. What’s more it’s also the digital products that, to a great extent, allow for V2G technology. Namely, one of the smart charging features facilitates the process of pushing the extra energy from an EV’s battery back to the grid, ensuring no energy is wasted and rooting the industry deeper in its eco-friendly aspects.
Finally, apart from the charging-maintenance aspects, software reaches further, all the way to its impact on transportation as a whole. Something called connected car data is being used across all types of vehicles for a while now. Connected cars are capable of gathering all sorts of information. From principle information, such as the speed or location, through engine status and malfunctions all the way to details such as whether the door was locked. Information is then used for many ways, from enabling shared transportation and services like Uber, to data used by insurance companies.

It’s free to say that software in eMobility touches all its aspects and makes improvements in all areas.
Given all the aspects of the eMobility world enabled by software solutions, it’s pretty evident that electric vehicles are software-dependent, and this is likely to continue in the future. As such, it is important for companies operating in the eMobility space to have a strong software development team, whether in-house or outsourced to ensure the highest level of smoothly-running services. 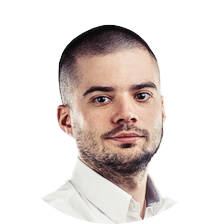